On Friday I showed you bits of my neighbourhood, which was created during the days of working class housing- and food shortages that followed World War I and the breakup of the Habsburg Empire.  But of course this problem extended to all of Vienna, and the cooperative garden settlements that were built in the 1920s were only a part of a much larger municipal construction history. So today, since it is the European “labour day weekend” (in Europe, labour day is celebrated on the 1st of May), part two of the story, with some insights into one of the largest municipal housing complexes of that era.

Apart from the cooperative housing projects, the city also began building municipal housing in the 1920s.  Until the end of the 19th century, the living situation of the working class was for the most part ghastly.  The only option were private apartment buildings with often unacceptable living conditions. In order to alleviate the housing shortage in Vienna around the turn of the 20th century, industrialists and charitable associations made first attempts to build workers’ houses in the form of factory apartments. During the First World War, these efforts came to a standstill. In 1917, almost three quarters of all Viennese apartments were overcrowded one- and two-room apartments. A housing census carried out in 1917 had shown that 92% of all existing apartments had no toilet of their own and 95% of all apartments were without water pipes. Worker apartments in Vienna had an average area of 20 m², and so some 58% of the people in working families had no bed of their own (they were so-called sleepers, who had to take turns sharing the available beds in shifts).

Immediately after the end of the war, when a glaring housing shortage led to massive protests, various self-help organizations developed the “settler movement”, which was initially funded by the municipality of Vienna, and which I talked about in my previous post.The “garden city” idea, which was also preferred by the majority of architects, was however soon replaced by the concept of large residential complexes – nevertheless, although more urban in look, these were also planned with large green recreational spaces. The construction of these so-called “superblocks” with integrated, collectively usable, residential facilities  was of course also highly politically motivated to promote social democracy.

Politics aside, it enabled the creation of around 65,000 new apartments within just a decade.

The Wienmuseum had an exhibition on “Red Vienna” last year and offered special guided tours of several such housing projects, and I had a chance to visit one of the largest residential complexes, the impressive Karl Marx Hof, in June of 2019. I never got around to processing the photos, but this weekend I finally did and take the opportunity to present you with part 2 of my blog on the development of low-cost housing for the Viennese working classes.

The complex was designed by an Otto Wagner student, the city architect Karl Ehn.  It was built from 1927 to 1930 (with a further expansion until 1933) on inexpensive land along the Franz-Josefs-Bahn railway station. The building originally offered 1,382 apartments for around 5,000 residents. 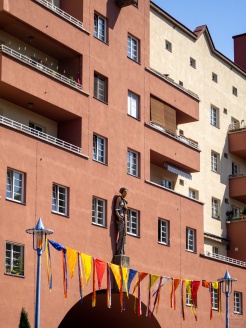 The complex was revolutionary in concept and scope. In the public areas, spacious garden courtyards provided enough light, fresh air and room for exercise. Children could play there safely, away from the streets and traffic. The apartments themselves were equipped with hitherto unknown conveniences for the workers: All rooms were directly illuminated and ventilated, each apartment was given an anteroom to the staircase, and almost all apartments had balconies or loggias, as well as running water and toilets. Imagine that!  Today, it seems so mundane, but back then this was enormous progress in comfort. 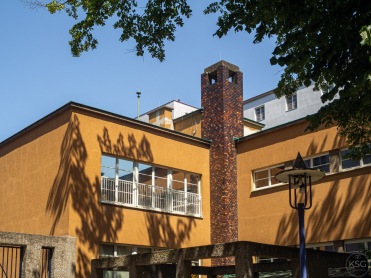 Balconies and loggias were an incredibly luxurious feature at the time of construction.

The communal facilities for residents included two central laundry buildings with 62 washing stands, two bathrooms with 20 tubs and 30 showers, two kindergartens, a mother counselling centre, a youth centre, a library, a dental clinic, a public health centre with an outpatient clinic, a pharmacy, a post office, several medical practices, and even coffee houses, as well as premises for political organizations and 25 shops. 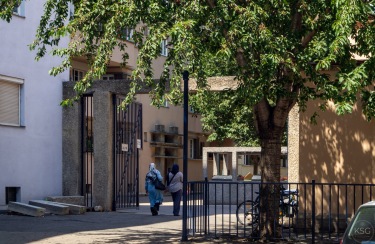 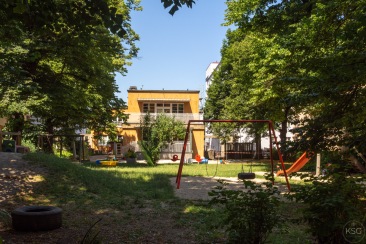 To this day, it is a well maintained and popular housing complex that over the years has been renovated several times. There are now also larger apartments, and of course the standards have been upgraded.

The sun was really glaring the day I visited, so there were strong contrasts.  I edited a few photos in black and white to take advantage of this, although the soft brown tones of the majority of the buildings get lost that way. 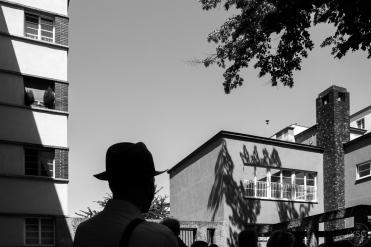 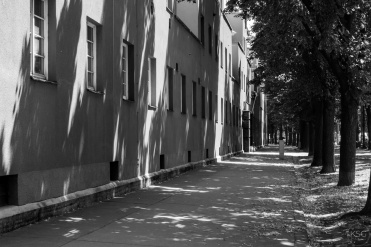 You can visit the permanent exhibition space “Waschsalon” at the Karl Marx Hof if you want to learn more about the history of the Viennese working class and workers´movement and about the concept and development of public housing.  They also offer guided walks through this and other public housing projects in Vienna. During times of Covid-19, such outdoor walks may be just the thing!

The complex is easily reached by public transport – the subway U4 and Schnellbahn stop right at the Heiligenstadt trainstation across from its main entrance.

Incidentally, across the street from the Karl Marx Hof on Heiligenstätterstraße I spotted an old advertising mural of a long-gone laundry and cleaning business, dating back to 1958.  There are many such “ghost letters” and signs around in Vienna.  But that is another story.

There are many other public housing complexes around town, many of the newer ones with interesting architectural designs, but my favourite ones remain those of the 1920s and 1930s, because they still have some Art Nouveau elements — until about 1922, most of the buildings were designed by the city building office, which employed several architects from the Otto Wagner school.

The construction of communal housing projects was on a hiatus from the mid 1930s until after World War II, when due to large-scale destruction the city began construction again.  Between the 1950s and 1970s a severe shortage of affordable housing drove the building of mega-complexes with plain facades and much criticized linear layouts.  One such “Gemeindebau” from the 1960s is also located in my immediate vicinity. It has been improved in recent years with the addition of better landscaped parks and a newly built kindergarten. Nowadays, the standards are different and architecturally more interesting complexes are again being designed. They are definitely worth taking a look at.

6 thoughts on “Stones that speak”