Like many of us, the COVID-19 spread prevention measures for me have meant a lot of time spent at home, where I can fortunately continue to work (in home office), enjoy culture (via innumerable streams from the wonderful world of cultural institutions), exercise (with regular live streams of Pilates, yoga and Zumba classes), and take photos (at home, in my garden, and exploring the neighbourhood).

Thanks to our dog (Don Alfonso), I tend to go for longish walks every day, and to combat boredom I have been varying our route and have discovered paths in my hood that I did not even know existed, even though I have lived here for a long time. We are such creatures of habit! One thing this semi-quarantine has been good for is to get me out of my usual walking routine. So this led me to conceive a photographic documentary series on my immediate vicinity. I live in an area that derived from the Viennese “settlers movement” of the post war 1920s. I grew up here, then moved away for some twenty years, and have now been back for a bit over a decade.

My vicinity is dominated by three types of spatial elements: small gardens, cooperative houses, and a graveyard.

A dominant element are small gardens with – nowadays ever larger – one-family homes and a few remaining tiny garden houses. Such small gardens can be found in all the outer districts of Vienna. Historically, the first such gardens date back to the ideas of the German medical doctor Moritz Schreber, who – in an era of increasing industrialisation – wanted to secure healthy green areas for children to play (but who otherwise advocated some very cruel methods of children´s education and discipline). Hence these small gardens are often referred to as “Schrebergarten”. Although there were some early examples of such gardens in Vienna dating back to the early 1900s, they began seriously sprouting up in response to severe food shortages during the first World War.

During the war, the city administration encouraged the population to use every bit of spare greenland to grow potatoes and vegetables, and allotted thousands of so-called war vegetable gardens. They were meant to be emergency allotments and were distributed randomly, without a spatial plan or any particular rules. By the fall of 1918 there were 20.000 such vegetable gardens dotting the entire city of Vienna. Although they were meant only to alleviate war shortages, when returning soldiers found themselves unemployed and hungry after the war, their numbers grew even further. By 1921 there were more than 40.000 “wild” small gardens in Vienna. The emergency measures had turned into a veritable movement, and at last the municipality began to try to organize the gardens into orderly colonies, providing low-cost loans to the gardening associations to install water pipes and fences, and finally creating a proper municipal allotment area office. Zoning laws were decreed to permanently establish a small garden zone on the city´s outskirts, and building standards were created for the small huts and houses that had been sprouting up in an unregulated manner in these gardens.

Such urban allotment gardens are still very much in demand. Those that are owned by the city are leased to a general tenant, for an indefinite period by sublease contracts designated for gardening use, and there is an umbrella association of allotment gardeners. They have an interesting history of the German and Austrian small garden movement on their website (in German).

Squeezed in between two one family houses 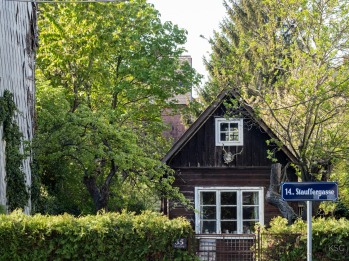 one of the old miniature garden houses in the neighbourhood

When I was a child, there was a small grocery just two blocks away, where I used to go with my grandmother to get a kilo of flour or some fresh peas for shelling. As happened everywhere, when supermarkets started to dominate the food shopping scene, it closed its doors, but remained architecturally unaltered as a family home. I love the arched Art Nouveau style rounded balcony, the corner windows, and the gable.

Walking up a street I don´t usually frequent, I was surprised to find a small wooden church amidst the other small gardens.

It is fairly incredible to me that I never took note of its existence until now.

Visible from several spots around the neighbourhood is also an old factory building. Once a production facility for optical devices of the Carl Zeiss works, it contains an observatory dome that was used for testing the optical equipment. From 1918 onwards, however, it was sold to a radio manufacture, and eventually became the „Wiener Radiowerke AG“ (WIRAG). The first Philips tape recorder was produced here in 1947 and the first video device in 1964. The existing plant was relocated between 1985 and 1987, and since then the area has been used for military purposes.

My daily walks often tend to take me uphill towards Steinhof, and this is where I find the second dominant element, a very extensive settlement of cooperative row-houses, which was built in the 1920s. The Flötzersteig cooperative settlement “Gartensiedlung” is one of the largest settlements of the garden and settler movement in Vienna, built from 1922 to 1925 according to plans by Franz Kaym and Alfons Hetmanek, with several extensions until 1931. The houses have small front gardens on the street side, and backyards that once offered space for growing vegetables and small vineyards and are now mostly put to decorative uses (though one does see a few vegetable gardens in between the deck chairs and laundry lines).

The settler movement of the 1920s originally arose from a movement of “wild settlers” who built illegal dwellings after the end of the First World War – mostly in the Vienna Woods. A food shortage was accompanied by the dramatically worsened living situation. Numerous, mutually supportive self-help organizations soon formed, which were also eventually supported by the municipality of Vienna.

It was not, however, municipal housing construction in the later sense. The cornerstones of this “third way” beyond the market and the state or municipality were the non-profit house ownership by a cooperative, the use of “own work effort” – the settlers usually had to do at least 1,000 to a maximum of 3,000 unpaid voluntary working hours -, the establishment of a communal infrastructure and self-administration. The link between the local government and the settlers was a public economic and building materials agency (GESIBA), which ensured the supply of building materials and was soon to become Austria’s largest developer as a community-owned company, as well as the settlement office of the municipality of Vienna, headed by Adolf Loos. Within a few years, around 15,000 cooperative residential units – mostly in row houses – were created in a total of almost 50 residential complexes, which still shape large parts of the outskirts of Vienna. 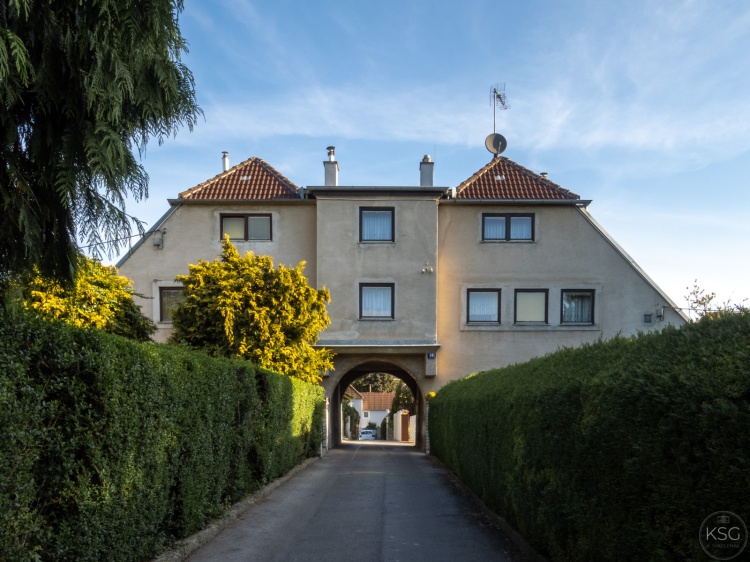 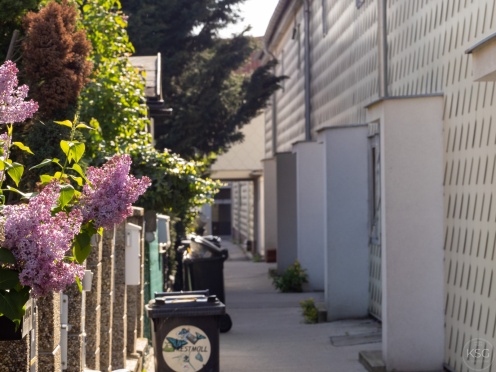 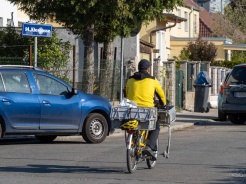 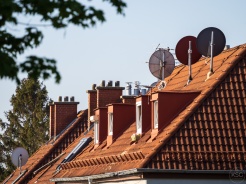 The streets in my quarter are named for working class members who died during the 1848 uprisings that spread through Europe at the time. (Too much history to go into here, but one might say it was an early sign of the social justice movements that would shape later political developments.)

There was once a small municipal library in the community rooms of this cooperative complex. I used to come here to borrow books (I recall Hitchcock´s The Three Investigators series being a nail-bitingly suspenseful favourite) during my primary school days. 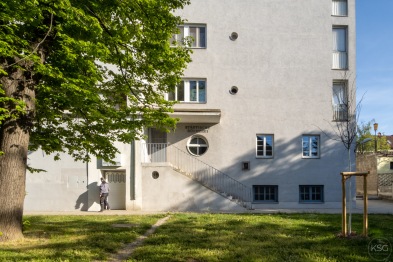 It has just been renovated

Long closed, the library sign still hangs above the round staircase window, and I found out from a workman that the room has just been renovated. He let me photograph it, but did not know what it was going to be used for, so I am curious to find out eventually. The other part of the complex houses a municipal retiree club (one of many such establishments that the city offers to its senior citizens for recreational activities), and we go there on election days to cast our votes.

The other good news is that local groceries are making a mini come-back.

A pharmacy, a kindergarten and a cooperative “sports and cultural association” with a tennis court are also part of the extensive cooperative garden settlement – and from the 1st of May outdoor tennis is allowed again in Vienna, so it will no longer be as empty as during the Covid-19 quarantine. 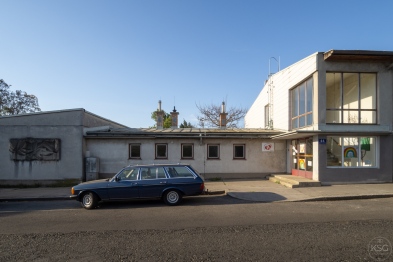 The third prominent feature of my neighbourhood is the extensive Baumgartner graveyard. We have “quiet neighbours”, as my husband likes to joke. Today’s cemetery goes back to a complex that was built in 1786 by the communities of Ober- and Unterbaumgarten in Penzing. It has of course been expanded and changed several times since then. Some people have asked me if I mind living next to a graveyard – not at all. I grew up here, so I am very used to it, nor am I superstitious. I find them peaceful places where one can go for a quiet walk and let thoughts roam.

And in the evening of All Souls´Day (which Americans celebrate as Halloween), when people come and put thousands of red candles onto their loved ones´graves, the view from my window is positively romantic. 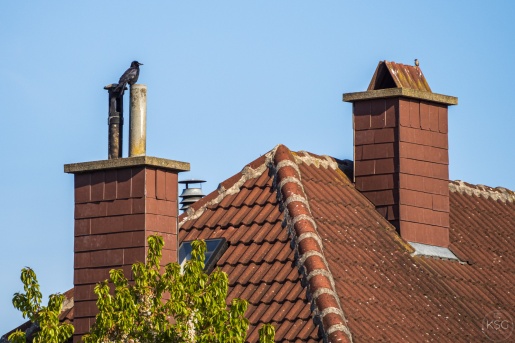 Not so quiet neighbours 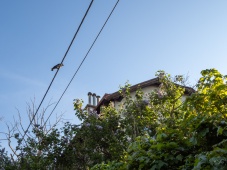 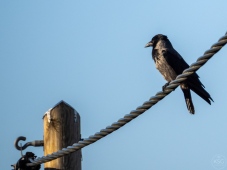 Crows are prominent residents of my neighbourhood. Many people don’t like them, as they are noisy, and some say they haunt graveyards. But they are smart and funny, and the real reason they like graveyards is on the one hand to eat the candle wax in the winter, and on the other to hide their walnuts in the green. In fact, corvids are known to be among the most intelligent of birds, and I love them.

Walking just around the corner, I can get a glimpse of the golden dome of the beautiful Church at Steinhof, designed by Otto Wagner in art deco style and finished 1907. It sits above on a hill, inside the grounds of the Otto Wagner Hospital and is considered one of the most important Jugendstil (Art Nouveau) churches in the world. The church and hospital, because of their history, deserve a blog of their own, which maybe I will get around to one day.

Today the Otto Wagner hospital is flagged, in celebration of the public holiday. 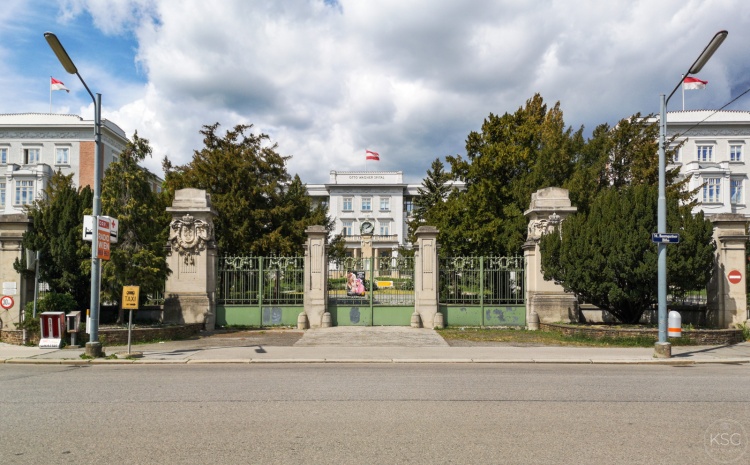 Much as I miss travelling and am sad that two trips I had been looking forward to this spring and early summer had to be cancelled because of the Covid-19 pandemic, I also enjoy the opportunity this has brought me to get to know my own neighbourhood´s history. As Goethe famously said – good things are so close.

P.S. This post contains unpaid advertisement (naming of a local business). I am not getting anything for this.

8 thoughts on “Close to home”