The city of Krems near Vienna is a veritable hotspot for art these days, pretty impressive for a town of this size.  (Krems has just under 25000 inhabitants.)  Last Sunday Instagramers Austria organized another fantastic instatrip (I would call it “Krems reloaded”, since in early September we also visited some art exhibitions that are part of the complex of Kunstmeile Krems).  This time our full day tour took us to see the Karikaturmuseum (Cartoon Museum),  the new exhibition about Kremser Schmidt and Padhi Frieberger at Museumkrems, and finally to the Göttweig Benedictine monastery.  (I will dedicate a separate blog entry to Göttweig.)

Political satire in vibrant color – from Austria to the Czech Republic

The Cartoon Museum Krems is the only Austrian museum for satirical art and is dedicated above all to political caricature.  Austrians of my generation grew up with the often biting and always entertaining  cartoon art of Erich Sokol (1933 – 2003) and Manfred Deix (1949 – 2016).  Some of this art is plainly amusing, while the political works of these skillful observers of life are thought-provoking and astute – and surely have stepped on many toes.

Sokol was a pioneer of a new Austrian school in the caricature scene, and he stood out especially within his superb portrait caricatures.  His illustrations were shown primarily in Austrian newspapers and magazines, but he was also featured in Playboy in the 1950s and other magazines around the world.

Their styles are different, but both Sokol and Deix were relentless critics of social conventions, xenophobia, corruption, and generally political machinations.  Deix also took on the hypocrisy of church institutions in view of current events and made fun of the celebrity culture.

Political satire at its sharpest 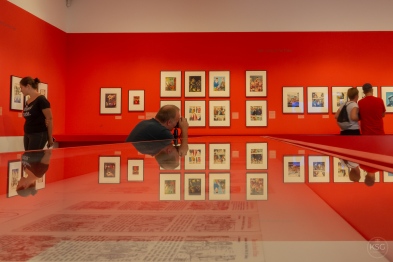 A little curio about Deix and his wife Marietta is that they gave a home to up to 70 cats – talk about excessive!  One of his books, “Deix Tierwelt – Katzen & Co”, then also has a central focus on cats –and even his gravestone at Vienna´s Zentralfriedhof is headed by an oversized cat statue wearing a golden crown.

Currently the Karikaturmuseum is also showing some cartoon art by Czech artists in the exhibition “Ahoj Nachbar!”.

World famous in Krems. From Kremser Schmidt to Padhi Frieberger

At the Museumkrems, the Landesgalerie Niederösterreich has juxtaposed two epochs of art:  The works of Martin Johann Schmidt (1718-1801), and those of contemporary artist Padhi Frieberger (x – 2016).  These are exhibited on opposing walls.

Martin Johann Schmidt, or “Kremser Schmidt”,  was a painter of the Baroque and a veritable “star” in Lower Austria. During his lifetime he experienced many radical changes, from the reign of Charles VI. to the era of Maria Theresa, the period of reforms of Joseph II, to Francis II and the Napoleonic Wars.  He painted several works on order from various church institutions, initially in Krems and later fulfilled orders from several neighboring countries. He was probably the first artist in Lower Austria, who was able to establish a position at the head of society with his artistic life and became truly part of “the establishment”.

Juxtaposed to this, the Kremsmuseum is showing a selection of works of “artistic resistance” 200 years later, epitomized by the work of Padhi Frieberger.  Frieberger was a “universal” artist, working in several genres, from photography, to collages, to portraits and jazz.  He was political in his work, a member of the 68 movement, critical of social conditions and of how Austria´s national socialist past was swept under the rug in the 1970s.  He was also a pioneer of the environmental green movement. 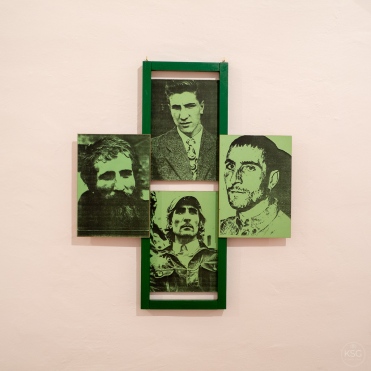 Between these two extremes the museum is showing the art of Michael Wutky (Italy traveler and effect artist on mount Vesuvius),   images of the photo and film pioneer Josef Maria Eder, and other contemporary artists who approach the work of Schmidt with new interpretations.

Wolfgang, our host from Igersaustria 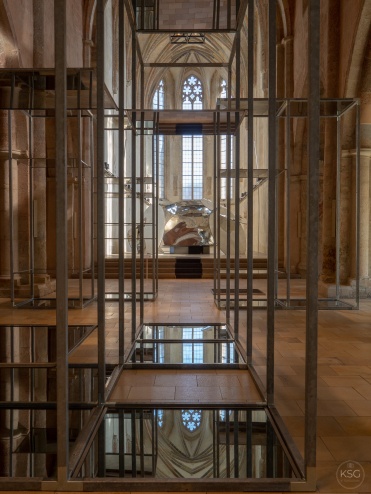 We also had another glimpse at the Dominican Church and Eva Schlegel´s mirror installations – of course I could not resist taking a few more pictures.

All in all, I really recommend a visit to the art establishments of Krems, followed by a stroll through the old town streets, where you can sit and have an iced coffee after all that art immersion.

Thanks again to @igersaustria.at and our kind hosts at @karikaturmuseumkrems and #kunstmeilekrems for the tour.