Last Sunday I made a special day trip  to Krems, less than an hour from Vienna, thanks to an Instawalk opportunity with Instagramers Austria.  We spent a great day exploring the various exhibition spaces of the Kunsthalle Krems and the Forum Frohner.

The Kunsthalle Krems-Stein in Stein an der Donau (municipality of Krems) is a modern international exhibition building in Lower Austria, which was built from 1992 to 1995 according to the plans of the architect Adolf Krischanitz in the former tobacco factory in the Stein district.  (Incidentally, the tobacco factory was built as a social enterprise to combat unemployment after World War I, and from the 1920s up until the 1980s it employed some 800 women, who produced Viginia cigars.)  The focus of Kunsthalle Krems is on art after 1945.

The first part of our instawalk was dedicated to the Austrian photo and multimedia artist Eva Schlegel.  Her themes deal with limits of perception, and with blurring the line between photographic objectivity and picturesque blur. 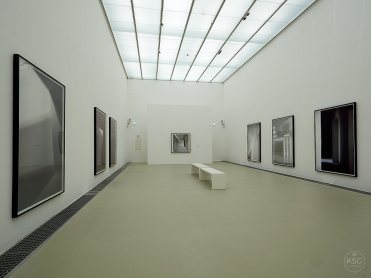 … @sargola had to align the benches perfectly for a photo

At the Kunsthalle Krems itself she is featured with an interesting series that she calls “SPACES”.  This theme has various components,  all of which are currently on view at various locations.  One of them is this series of architectural and abstract  large-scale photographs, characteristically blurry, that show spaces – including the Kunsthalle´s columned hall –  as abstract forms.

At the Kunsthalle´s Central Hall, you can view some of her video installations, which complete this set of “space” themed exhibitions, with, for example, videos of a man falling through space, and the words of an astronaut spiraling around in a circle.

The Kunsthalle Krems gained an additional exhibition space in 2017, the gothic Dominican Church,  which means that the “Krems Art Mile” (of which the Caricature Museum is also a part) now begins in front of the Steiner Tor and extends beyond the Kremser Tor. 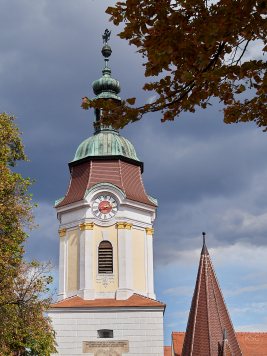 The focus here is on space related projects that can be integrated into the gothic sacral architecture.   At the Dominican church we were intrigued by one component of Eva Schlegel´s works.

She constructed a really interesting installation of steel and mirrors that reflect the stone architecture and windows of the church, and occasionally the feet or heads of visitors.

Apart from Eva Schlegel´s work, we also got to see some of the extensive private Hubert Looser Collection, with sculptures and works on paper by Picasso, Gorky, Warhol, de Kooning and many others.    More than 40 artists are featured in this large exhibition.

We were on a schedule, plus wanting to find the best angles to photograph the art, but there is a lot to absorb here, so I would recommend taking it in in stages, or at least dedicating an entire afternoon to this.

Another church, another installation: the Circulus Virtualis bei the German artist and composer Hans Peter Kuhn is a sound and light installation with steles standing in a circle in the darkened Minoritenkirche (a deconsecrated church of the Minorites that is now part of the Krems museum complex).

The circle setup seemed to me an allegory of Stonehenge, the whole atmosphere seemed mystical.  Yet what you hear  is not at all metaphysical, no religion, doctrine or ideology is associated with it.  Rather, industrial machines, traffic and household gadgets create the contemplative sound that pervades this space.

Named after the artist Adolf Frohner, FORUM FROHNER is located in the newly adapted complex of the former Minorite monastery in Stein. It is a “White Cube” without windows, meant to allow a concentrated focus on the art.  At the center of the exhibition activities is the artistic work of artist Adolf Frohner, but there are also alternating exhibitions with national and international artists.  In 2017, the Forum Frohner celebrated its tenth anniversary.   The current exhibition (until 7 October 2018) is “Eva und die Zukunft” (Eve and the Future), a Hommage to the late Austrian art historian and museum director Werner Hofmann.

Hofmann had put together an exhibition by the same name in Hamburg in 1986.  Hofmann borrowed the title from Max Klinger‘s cycle of (outstanding) etchings “Eve and the Future” (1898).  To Hofmann it meant a relativization of negative religious interpretation of women;  Hofmann intepreted Klinger´s etchings as a critique of the deadlocked artistic characterizations of gender roles that were prevalent in the late 19th century.

Numerous chapters in the show presented the “counter-images” of the male protagonists of art around 1800, and Hofmann’s “feminist” exhibition cycle was celebrated throughout Europe.   In the smaller re-make of his exhibition, the Forum Frohner curators have included works by Maria Lassnig and Valie Export, as well as the original etchings by Max Klinger and other artists.

Actually, what I was most impressed with were the etchings of Max Klinger, which seem almost plastic in their composition, detail, and the way he managed to convey structure and dynamic.

A new home for the Lower Austrian State Collections of Art

Also in Krems will soon be a new exhibition space, which is to house the huge Lower Austrian State Collections of Art (the Landesgalerie Niederösterreich), including masterpieces from the Middle Ages and Baroque, up to the nineteenth century and contemporary art.  This collection has so far not had a dedicated home.  A new building is currently undergoing the final touches, a modern brand-new cube with a “twist”, it is a four-story building with 3,000 square meters of exhibition spaces. There will be a subterranean connection to the Kunsthalle Krems.  I can´t wait to see it when it opens.

Thank you, Wolfgang (@famiglia_vienna) of Instagramers Austria, for organizing this excursion, and to Elisabeth of @Kunsthalle.Krems for accompanying us on the nice tour and organizing the hospitality.  I am looking forward to the next one!

P.S. I took loads of photos and wanted to show many of them, so I´ve put some in slideshows, which you cannot see in the newsletter version.  (You need flashplayer to see the slideshows.)

One thought on “Instawalking through a Mile of Art in Krems”