All you need is love, and Ganymed: another wonderful evening of performances and art at the Kunsthistorisches Museum Wien.  What a beautiful evening of theatre, and music, dance, and the visual delights of the setting at the KHM!

Love and song – songs about romantic love dominate the charts.  But do we really know what love is?  Where is that special place in the heart?  And what kind of love are we talking about?

Ganymed in Love 2019 does not provide answers, but lots of food for thought.  This  sequel to five prior such theatrical events at the museum, makes paintings come to life, in a way.   I found myself at times wondering about the relation between the text and the painting in question, as the link is not always immediately obvious. ( What, for example, is the connection between Salome with the Head of John the Baptist and a little girl with a teddy bear uncomfortably experiencing something approaching molestation by her own father?)  But it does not matter, I think, whether we as viewers get it “right”.  Art is always  open to the interpretation of the beholder.

The Ganymed event is an intense immersive experience into different worlds, dreamy and thought-provoking, touching, beautiful, and sometimes stomach-turning. 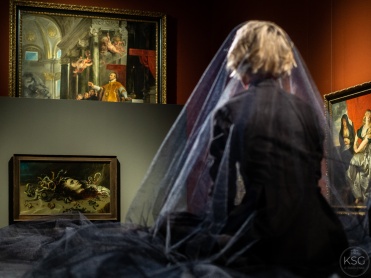 Remember Me (Nahum Tate/Henry Purcell) about the head of the Medusa by Rubens
This is the sixth show in the Ganymed series that takes place at Vienna´s foremost art museum, and it´s all about love, or something like love – sometimes aberrations of love, sometimes love of small things, like flowers, or strawberries.

What you see here is a series of performances relating to works of art, but which also often relate to current events.  “Philemon“, for example, by Martin Pollack, about Rubens “Thunderstorm Landscape”, tackles the sadly ever current topics of hate for the “other” and exclusion.  “Don´t we have enough?”, asks Pollack.

About the Thunderstorm Landscape by Rubens
Is love blind?  Sometimes.  But hate, hate is always blind.
Does an apple a day really keep the doctor away? A musical parable entitled “An apple a day” about temptation, and about Adam and Eve.

An apple a day about Adam and Eve by Hans Memling

A hauntingly beautiful piano duet
What love is there for the old?  What if there is nobody left to love?  If all your loved ones have died around you?  Or if you lost young love and have grown old waiting for it to return?  This is a question addressed by Milena Michiko Flasar in “Vergissmeinnicht” (Forgetmenot) about the painting “Old woman at the window” by Gerard Dou.

Sabine Haupt gives a stellar performance about waiting in and for love.

“Was sie noch liebt. Das Warten.”
There is something for everyone in this show.  Spoken word, music, and dance.  Such as the riveting performance by Manaho Shimokawa and Martin Eberle, torch song.

“Why didn´t you come back sooner?”

Torch Song, with Martin Eberle and Manaho Shimokawa
You also, of course, have a chance to stroll around all the rooms where performances take place and admire other works of art. The only drawback is the sheer number of people – the space around the performers does become rather crowded, but you are free to come and go as you please.

This extraordinary event of all the arts is produced by the creative team of an ensemble quirkily named “wenn es soweit ist” – powered by the German director Jacqueline Kornmüller and the Austrian producer and actor Peter Wolf.  They convene thirty actors, musicians and dancers to perform in front of a selection of paintings from the museum´s collection. Before though, Kornmüller and Wolf engage writers to produce texts to match the selected paintings, and then ask the actors in turn to interpret these texts. A labor of love for sure!

Peter Wolf, the producer of this extraordinary event, and also an outstanding actor, performs in “The father, the son, a brother and a parable” by Franz Schuh, about the painting “Parable of the lost son” by Pompeo Batoni.

“The danger, the extent of which we can only truly recognize in the 21st century – looking back and looking ahead -, the danger is the so-called resentment, which often finds expression in the the maxim “I have been treated unfairly”, or “somebody got preferential treatment over me, and on top of all someone who is much worse than me”. 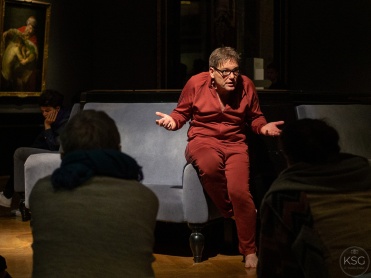 A moving performance by Peter Wolf

What´s in a name?

[Ganymedes] was the loveliest born of the race of mortals, and therefore
the gods caught him away to themselves, to be Zeus’ wine-pourer,
for the sake of his beauty, so he might be among the immortals.

Johann Wolfgang von Goethe wrote a poem about Ganymed too, and this mythical figure has found its way into many a painting and sculpture.

Ganymed (the show, not the mythical youth) is actually what started me blogging, with Ganymed Nature almost exactly a year ago, so this is also, if you will, my blogger anniversary.   (Thank you, Anna Attems from Kunst für Uns for encouraging me!)  Last Wednesday I got to see this fabulous show again, thanks to being invited to a Blogger Meet, joined by Instagramers from @igersaustria and @igersvienna.  Thank you so much for the invitation!

Shows run through the 15th of June.  If you want to see it, be quick, because it is almost sold out.

Note also that on 25 April there will be a special charity show benefiting Caritas at Carla at Mittersteig.   So here is an opportunity to enjoy the show in a differet setting for a good cause!

If you want to see more of my impressions, have a look at the slideshow below (on a laptop, may not work on mobile).

More Info on the KHM website about Ganymed in Love