Well, it´s international women´s day again, the moment in time when all the hardships and injustices done to women in the past and in the now are brought to the forefront of media attention.   But the focus of my blog today is not on the general politics of or against feminism and women´s rights.  Rather, I want to strongly recommend the new exhibition at the Belvedere museum, where outstanding female artists from the late 1800s and into the 1930s finally get their due. Or get their due again, after long decades in the cellars of oblivion.

While a few of the artists whose works are exhibited here are well known (e.g. Tina Blau), many among them have been all but forgotten, and not because their work was in some way inferior, but because their social circumstances, which prescribed certain limited roles for women, constituted an enormous roadblock for female artists and led to many brilliant pieces of art being lost or deliberately disregarded for many decades – even beyond the lifetime of these artists.

At the Lower Belvedere Museum curator Sabine Fellner has put together an outstanding and quite large  exhibition on the female artists of Viennese Modernism.   City of Women – Female Artists in Vienna from 1900 to 1938, a retrospective that aims to commemorate these female artists, their art, and their achievements for women´s emancipation.

On the occasion of Women´s Day (when altogether too many interesting are happening in Vienna and it is so hard to decide where to go) I signed up for a guided overview tour.  Lucky me, when I got there I found that none other than Philipp Reichel, one of my favorite art educators at the Belvedere, was giving the tour.  He always explains such interesting details about the historic context as well as the art itself.

Although I am by no means an art expert, I first became interested in the topic of women in art several years ago after reading a novel about the unusual Italian painter Artemisia Gentileschi, the daugther of the artist Orazio Gentileschi.  In the early 1600s Artemisia learned painting from her father, and she was an incredibly talented and strong woman who was eventually able to overcome the prejudices of her time – and rape by a tutor –  and become a successful coveted artist.  Just look at her fantastic self portrait!  Her works of women as protagonists or equals to men are not only skillfully executed, but also convey her powerful message.  But even though she made it in the male-dominated art world, she remained an exception, and times did not improve much for women artists until well into the 20th century.

Art education as a male privilege

It is odd to think that in the early 1900s women were often considered to have inferior brains and were therefore denied (by men) the capacity for creativity.  Those who nevertheless dared to want to prove and realize their talents had to fight misogynist prejudices and try to obtain training outside the formal prestigious art education establishments, often having to pay for private tuition.  In Austria women were denied access to the Vienna Art Academy until 1920, so female artists had to find other ways to learn painting and drawing.   One alternative around 1900 was the School of Applied Arts.  Another was to go abroad for studies, which promoted the exchange with modern art trends.  As Mr. Reichel explained,  paintings such as the Prater scene below, were considered almost too bright, to well lit — as women who had seen the work of the Impressionists first hand began bringing this influence into the art world back home.

Learning to paint was only half of the story.  In the bourgeois milieu in Vienna around 1900, young girls could still find ways to be taught to draw or paint, but not to learn modeling or stone working. Being a sculptor did not correspond to the feminine gender image.

Nevertheless, the exhibition shows several sculptures by women who evidently braved it out against all those prejudices.  A striking large sculpture that greets you right at the start of the show is  “Witch getting made up for Walpurgis Night” by the sculptor Teresa Feodorowna Ries.  She apparently caused a scandal with the marble sculpture in 1896, but she also gained fame with it and was invited by Gustav Klimt in 1899 to exhibit in the Secession.  Ries, who happened to be Jewish,  fled to Switzerland in 1942, while her life’s work, including sculptures in public spaces, remained behind and were partly destroyed.

Even when women were able to become artists, getting to be taken seriously in their profession, and becoming successful in the male-dominated art business was another issue.  Some female artists developed strategies for self-marketing and founded their own associations.  Courageous, emancipated women, who were an important part of Viennese Modernism, are underestimated and under-appreciated to this day, even though at the time they achieved some fame.

Emilie Mediz-Pelikan was one of the most important  Austrian artists  around 1900. In addition to graphic art, she was primarily interested in landscape painting.   Introduced to the artistic developments in Germany and Holland, she began with landscape paintings in impressionist style, such as the chestnut trees below. 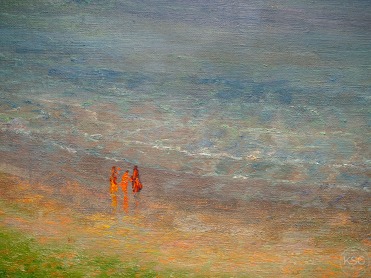 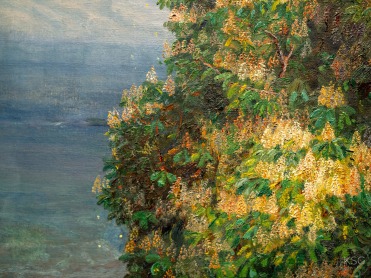 Helene Funke was a famous but economically not successful female painter. As the daughter of an industrialist family, she studied painting against the will of the family from 1899 at the Munich Ladies’ Academy. From 1905 until 1913 she resided in France, and after that until until her death in 1957 she lived in Vienna, where she died completely impoverished.  Her art was exhibited multiple times during her lifetime in Germany, France and Vienna. In Vienna she participated in exhibitions of the Vienna Secession, the Hagenbund, the Künstlerhaus and the Vienna Art Show.  In 1918 she became a member of the artist group “movement” or “free movement” (from 1919). In addition, she was a member of the group of Viennese women’s art.  Her trademark were portraits of women and women’s groups, but she also painted unusually luminous landscapes and still lifes.  It is incredible to think that such outstanding work became forgotten and that the artist became a pauper. 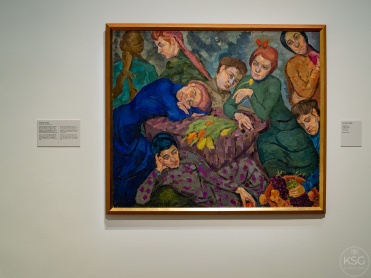 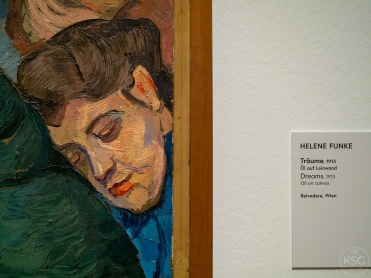 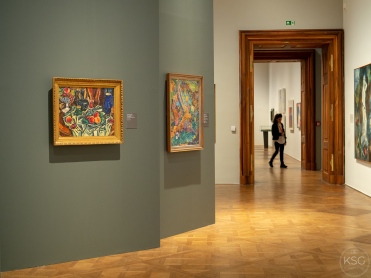 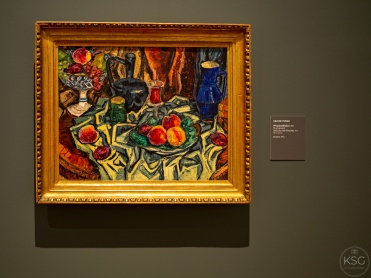 Broncia Koller-Pinell was another painter who has been all but forgotten, although her oeuvre is incredibly rich and diverse, as evidenced by many paintings on view in this exhibition.  She participated in Friday evening meetings of the Klimt group and had her paintings shown in about fifty exhibitions.  She was Jewish and died in 1934, leaving behind a great treasure of works of art  that show an evolution of style.

Have a look at the gallery here for more of Broncia Koller-Pinnell´s work (may not work on a mobile).

Much of the exhibition focuses on the individual biographies of these and so many other women artists.  Their stories are sometimes amazing, but more often sad.

Friedl Dicker-Brandeis, for example, was not only a photographer and artist, but also politically active in the Communist Party and was arrested in 1934.  After her release she fled to Prague, where she continued to work in the political underground and was deported to Theresienstadt in 1942, and then murdered at Auschwitz in 1944.

But all these painters and sculptors, who were celebrated around the turn of the century,  began disappearing  from museums, galleries and thus from art history when Austria became part of the Nazi regime.

There was the deliberate destruction of many Jewish artists’ careers.   Others were forced into exile by the collapsed art market.   And even after the war, many large museums were slow to pick up the slack and focused instead on better known male artists. 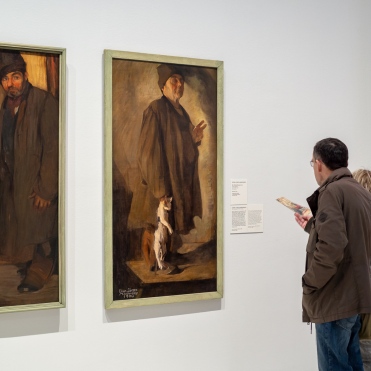 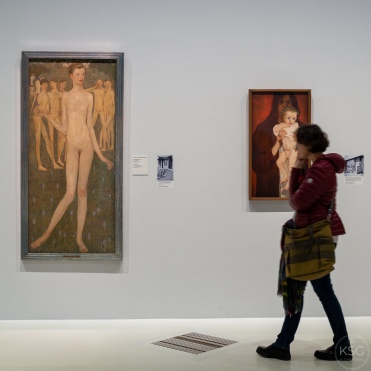 Why you should go to see this

You don´t have to be a feminist, you don´t have to care at all about women´s rights (though I hope you do), but you still should go see this exhibition if you appreciate art.  Because what is on view here is not “women´s art” as some sort of special category.  It is just great art.  The fact that it has been relegated to storage for the most part for a long time is all the more reason to find it exciting.

Incidentally, the Belvedere is also showing photographs of some lost works of art, and of the original hanging places of some of the paintings.  The context is something really interesting to see. 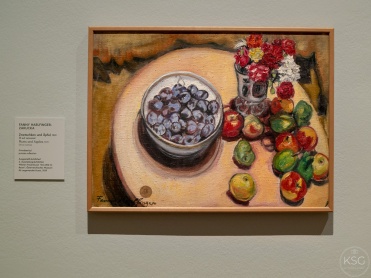 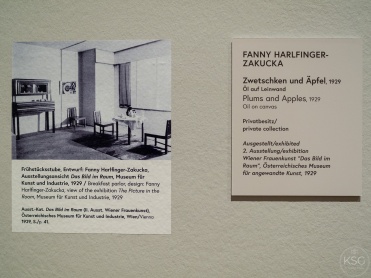 A photo of where the painting original hung.

I have introduced only a few of the outstanding painters you can find in this extraordinary exhibition, there are so many more.

Don´t miss it!  It runs until 19 May 2019, and the Belvedere offers a series of expert-led tours and overview tours that can be booked via their website.