The Kunsthistorisches Museum Wien is showing the largest ever comprehensive exhibition of works by Pieter Bruegel the Elder (sometimes spelled ’Brueghel’, and sometimes even ’Breugel’ and ’Breughel’).   On display are a whopping three quarters of all of his conserved paintings, plus almost half of his drawings and prints.  Last week I was so lucky to get to see this special exhibition together with other photo enthusiasts from Instagramers Austria.  This was a real privilege, because as it turns out, the exhibition is so well visited that there are hardly any tickets left.  The knowledgeable and interesting art expert Benjamin Rowles pointed out the many details in Bruegel´s large-scale paintings. 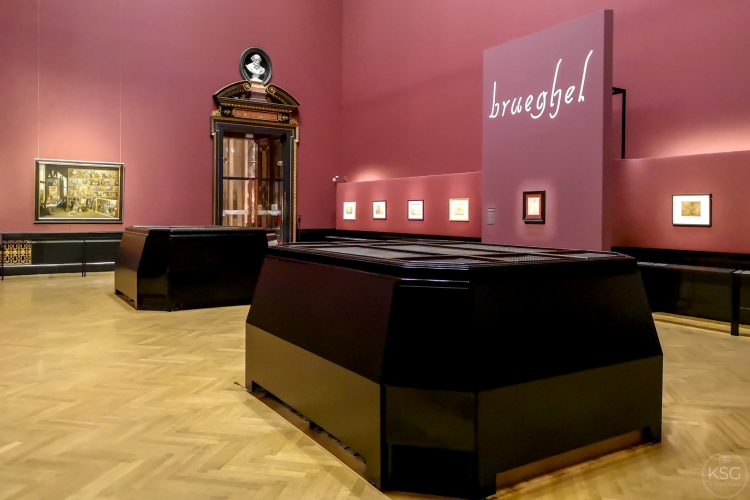 A new genre of painting

Pieter Bruegel the Elder was the most significant artist of Dutch and Flemish Renaissance painting,  and also a printmaker.  He worked mainly in the city of Antwerp´s painters´guild, though he spent his final years in Brussels.  Unfortunately he did not get very old, dying around the age of 40 when his children were quite young.  Both his sons became famous painters as well: Pieter Brueghel the Younger (1564-1638) and Jan Brueghel the Elder (1568-1625), though they did not learn painting from their father.  Pieter Brueghel the Younger also made copies of some of his father´s famous wood panel paintings.

Some of the graphic works of Pieter Bruegel t.E.

He is most famous for his genre paintings showing medieval landscapes and peasant scenes.  It was rare in Bruegel´s time to depict the  life of peasants in such almost documentary detail. 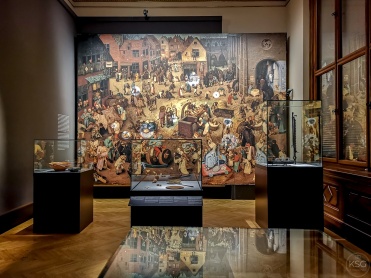 Do you know the busy look books (“Wimmelbilder”), or hidden objects books, for children, such as Richard Scarry’s Busy, Busy Town?  Well, in the 1500s Bruegel created just such scenes on wooden boards, depicting all facets of peasant life, religious myths, and also scenes of war and destruction. 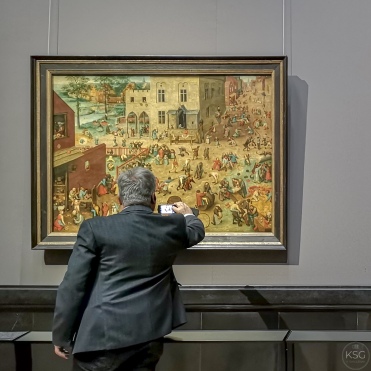 I think most of us know the iconic winter landscape with people skating and engaging in all kinds of sport on a frozen village pond.  This painting was in fact so popular that it has been copied  many times.

Some of the paintings contain figures so small that it seems Bruegel must have painted with a magnifying glass to achieve this level of detail.  In fact he received training in miniature painting from his  mother-in-law, Mayken Verhulst (1518-1599), who was a painter in her own right.

Detail of the (Little) Tower of Babel

I had never noticed how many people are standing around on the famous tower of Babel paintings until our guide pointed them out.   Have a look at the detail in the “Little” Tower of Babel above, one of two similar, but actually quite different depictions Bruegel painted of this mythic edifice.

The tools of the trade

Apart from the impressive collection of drawings, prints, and paintings, the KHM also tells the story of how Bruegel exercised his skill.  In the “technology cabinets”, the museum shows the results of an interdisciplinary research project involving several institutions.  The materials and techniques Bruegel used provide insights into his creative process.  Interestingly he painted on baltic oak panels, not on canvas.

Making the panels on which Bruegel would paint required utmost precision and was the task of specialized panel makers.  These panels had to be completely flat, smooth and stable.  Looking at this I realized how precious even the basic foundations for paintings were in the Middle Ages and Renaissance, and how difficult it may have been at times to obtain them.  After all, Bruegel could not just go to the next art supply shop.

Part of the research project into Bruegel´s techniques analyzed the painting Two Monkeys.  You can watch a fascinating virtual reconstruction of the painting process online, where the researchers have illustrated the  different phases of the composition’s evolution.

After the tour we had a chance to roam free in the almost empty lobby of the museum – always a treat because of the exquisite architecture.

Thank you, KHM Wien for this invitation, and Instagramers Austria, for letting me join you.

Although online the exhibition is sold out, you still have a chance to see it if you go to the cash desk shortly after the museum opens in the morning.

The exhibition runs until 13 January 2019.  But if you miss it, you can still see many of Bruegel´s famous landscape paintings at the museum, since the KHM has several of them in its permanent collection.

In addition, you can learn more about Bruegel at the special Bruegel2018 website that accompanies this exhibition.

One thought on “A masterful hand – Bruegel at the KHM Vienna”