Point and shoot, and you´ve got your beautiful view of Venice captured.  It was not always so simple.    A special goodie for Venice and photography lovers is currently on display at the Graphic Collection of the Academy of Fine Arts, Vienna: This first cabinet exhibition dedicated exclusively to photography, with a small selection of early photographs of Venice by the Italian Carlo Naya.  I found this quite interesting, as on the one hand I have a fascination with old (and new) photographs, and on the other hand at the end of January I will stop over in Venice, hoping to find some good photo opportunities with fewer people in the streets than during the main season, when Venice is almost unbearably crowded.

This copperplate cabinet exhibition provides a view into the third largest collection category (next to drawing and printmaking) of the Kupferstichkabinett  (copperplate cabinet) of the Academy of Fine Arts.   This impressive collection contains around 22,000 prints and is only partially known.  The beginning of the photography collection at the Vienna Academy dates back to 1855.  It contains, as you might expect, urban vistas and views of historic buildings, but also landscapes, “type studies” of people in traditional costumes from all over the world, fauna and flora, as well as photographs of works of art.

A few of Naya´s many photographs 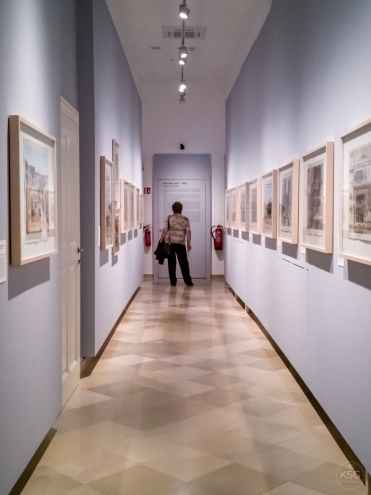 Carlo Naya was born in Tronzano Vercellese near Turin in 1816 and died in 1882 in Venice.  Although he studied law, he soon became fascinated with photography.  An inheritance allowed him to travel to major cities in Europe, Asia, and northern Africa. In Paris he was exposed to the new daguerreotype (and old photographic method named for its creator) technique and bought his first photo equipment.  He opened a photo studio in Istanbul (Constantinople at the time) in 1845 with his brother.  After his brother died, Carlo moved back to Italy and in 1857 married Ida Lessiak in Venice.   He became an outstanding travel, architecture and art photographer and won several medals and prizes for his work.  By 1868, his successful photography business employed some 20 staff members.  In 1873 he even participated in the Vienna World´s Fair.  After his death his widow ran the business until 1918, together with one of Naya´s assistants and her second husband. 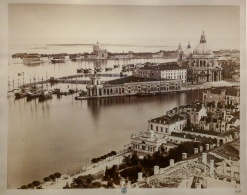 1864 view from the Campanile

What you see in his photographs of Venice are the typical views we still associate with it,  its palaces, bridges, squares and canals.  But he also took black and white photos of paintings and ceiling frescoes inside Venice´s palaces.

Given the type of equipment that was available in Naya´s time, don´t expect to see HD vistas.  The photos are quite grainy, and it was impossible to correct for strong contrasts in light.  (This is evident, for example, in the photograph above of the Doge´s Palace columns, where the columns are correctly exposed, but the background is completely washed out.)

What is also astonishing to today´s viewer are the apparently empty plazas of Venice.  On the one hand, the exhibition guide told us, it is likely that Naya sought out times when there were few people in the street to take his pictures, on the other hand it certainly was a lot less crowded with tourists in those days.  But what also allowed him to basically erase people from his photos was long term exposure – not a matter of choice, but because these early cameras required an exposure time of 15 minutes or more to let enough light in! 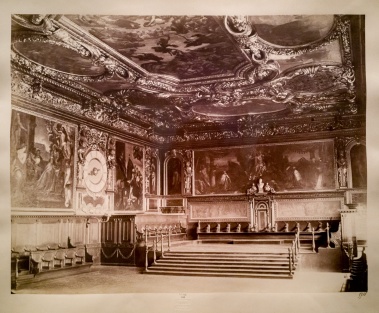 Three ceiling paintings in the Doge’s Palace are examples of Naya’s black and white photographs of paintings. 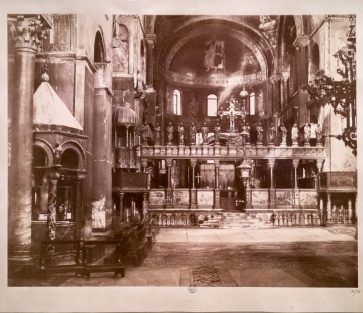 Some of his vistas, originally black and white, were thickly colorized and resemble paintings.  They were produced on albumen print and mounted on card.  This method used the albumen found in egg whites to bind the photographic chemicals to the paper and became the dominant form of photographic positives from 1855 to the start of the 20th century.  Colorization was, in a way, the photo editing method of the day – it not only turned black and white photos into attractive color vistas, it also allowed the artist to cover up unwanted blemishes.

In Naya´s day, tourists could not just take their own snapshots of attractions, so it was popular to buy photographs of favorite sites as a souvenir – akin to postcards, but of higher quality.

The Kupferstichkabinett keeps more than 90 copies of Carlo Naya’s works and works of art in Venice. They arrived at the Vienna Academy at the end of the 19th century and were used by art students for illustration.

If you want to see this exhibition, there are only a few days left to do so.  It is worth checking out the other rooms of this temporary exhibition space of the Academy Gallery at the Theatre Museum.  Right around the corner from Naya´s photographs, you will find these three older vistas of Venice, painted by the Venetian painter Francesco Guardi.

The museum can be found right across from the Albertina Museum.  It currently shares a space with the Theatre Museum.

“Take a photo of that car”, my husband said… men!

When leaving the museum…

Information sources:  Website of the Academy, exhibition brochure, and information gleaned from a guided tour of the exhibition

Note that the Graphic Collection of the Academy of Fine Arts Vienna is currently hosted by the Theatermuseum, while the main building of the Academy undergoes restoration works.

A catalog of the exhibition can be purchased for € 14.90 in the museum shop  of the Picture Gallery of the Academy of Fine Arts Vienna in the Theatre Museum.