The other day I got to see a contemporary staging of Macbeth at the gorgeous Musiktheater Linz, thanks to an instawalk with Igersaustria.  We got a behind-the-scenes tour of this impressive modern theatre building and then saw a stunning  dance and music interpretation of Shakespeare´s timeless classic about the deadly thirst for power at any price, which sadly appears as relevant today as it was in the bard´s time.

We saw some of the theatre props for various plays, the constume fundus for fairytales, and also the workshops where busts are made (from styrofoam!) and where stage furniture is put together and painted.  You can get a glimpse behind the scenes in this slide show. 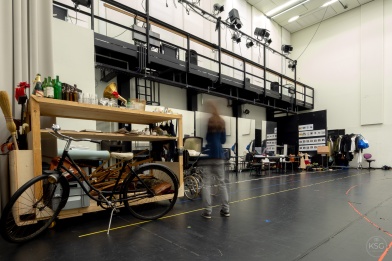 In 2013, the Landestheater Linz opened its new venue: the Musiktheater at Volksgarten.  (The location is excellent for out-of-town visitors, just a 5 minutes walk from the central train station.)  After four decades of political debates surrounding the construction,  the venue opened as a new home for opera,  operetta, ballet, and the fabulous Bruckner Orchestra Linz.   It is thus Europe’s most modern opera house, designed by the London architect Terry Pawson of the ArchitekturConsult ZT GmbH and architects, featuring a high standard of technical, architectural and ecological qualities in a prime location. 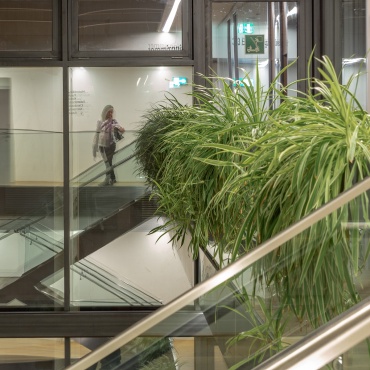 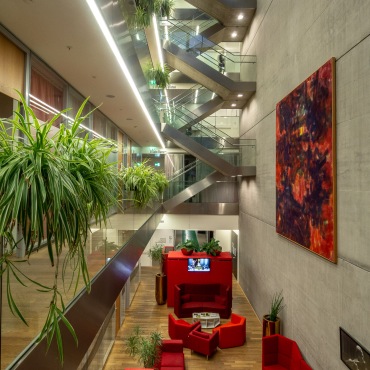 The staircase architecture is rather photogenic

There are also some beautiful bars and cafe spaces for break times and for event catering.

During theatre breaks or for events, guests can enjoy refreshments here

A beautiful bar at the Musiktheater Linz

The great hall can host up to 1,200 spectators, and there are several smaller performance spaces: the BlackBox (up to 270 seats), the BlackBoxLounge (up to 150 seats), the orchestra hall (up to 200 seats) and the Foyer stage (variable seats).

The top floor features the fine dining restaurant Anton.  Visitors are also welcome outside of the performances  in the “KlangFoyer”. This unique space was created in collaboration with the Ars Electronica Futurelab to invite exploration on many sensory levels.

So the story goes:  The prophecy of three witches awakens the royalty ambitions of the Scottish commander Macbeth and his wife, Lady Macbeth.   The infernal duo plan tu murder the Scottish King Duncan.  After the deed, Macbeth becomes king, but neither he nor Lady Macbeth find joy in their new positions.  She is driven mad by guilt, unable to wash the blood off her hands, while he unleashes a cruel bloodbath until he is finally killed himself.

In this modern staging  some of the Shakespearean details are left out and a lot of crass metaphors are added.  It is actually a 30 year old staging and choreography that the Musiktheater Linz is now staging again for the first time.    The Austrian choreographer Johann Kresnik wrote theater history with this piece in 1988, and the stage set was designed by none other than Austrian artist Gottfried Helnwein.   It shows this timeless story of the futile lust for power and riches in brutal, glaring metaphors.   The music for two pianists (Bela Fischer jr., Stefanos Vasileiadis) is by Kurt Schwertsik.  The shiny grand piano stands, dripping with meaning, in the middle of a blood-filled  basin covering what is normally the orchestra pit.

The dance performances are  simply incredible.  The piece is disturbing, and it is not for everyone (some people walked out during the performance)  – do not expect a lovely classic ballet.  The metaphors are poignant and in your face, there were times when I wanted to look away, but could not.  It has been several days since I saw it, and still images from the stage are floating through my mind.  In fact, I found it so brilliant that I am going back to see it again this weekend, so that my better half can see it too!  After all, Linz is only an hour away from Vienna by train.  Highly recommended!

Thank you very much for this ear- and eye-opening opportunity, Instagramers Austria with hostess Elisabeth and Landestheater Linz.

P.S.: We learned that the city of Linz wants to terminate the theater contract with the state of Upper Austria to economize.  The theater contract between the City of Linz and the Province of Upper Austria stipulates that the city pays around 14 million euros to the Theater und Orchester GmbH (TOG) of the state – which owns the Landestheater and the Brucknerorchester. But the arts cannot survive without public funding.  I sincerely hope that the city of Linz will think better of these plans and maintain funding for its  outstanding art institutions.