Of course, in Vienna, there´s the Danube, and its various side arms.  But there is also the Wienfluss, or simply Wien (“Vienna River”), which, for the most part, is less than impressive, imprisoned as it is in its concrete bed.  Over the past week I went to explore (photographically) some of its more natural sections.  Most of the time you would be forgiven to call the Wien a rivulet – except after heavy rains, when the floodgates are opened and the river levels can quickly rise all the way up to the street above.    But what is really lovely is the portion of river that flows through Vienna´s western part. Here, this small river has become a major attraction, both for the Viennese and for wildlife. I was inspired to go back there by a drone photo of the Wienfluss at Aufhof taken by @viennasquares (Instagram), which shows a meandering stream going through a veritable jungle.  I went to explore the section of river near the Hütteldorf train station, walking West from there. Here, the river is still tame, but you can already see the effects of the City´s attempts at renaturation.

Although it is called “Vienna river”, it actually starts elsewhere. It originates as “Dürre Wien” at 520 meters altitude on Kaiserbrunnberg at Rekawinkel in Lower Austria. About half of its length it runs  in the state of Lower Austria. I have to admit I´ve never been to the source – something I definitely want to check out at some point.

Regulation really changed this river.  Before it was regulated in 1898 (long after the regulation of the Danube in 1875), the Wien was a “real” river, meandering through Vienna with many side arms.  In an etching by J.F. Wizzoni, you can see what it looked like in 1822 – quite impressive.  Its brooks used to drive several mills in the city and its surroundings.   There were good reasons for imprisoning this river in its concrete bed: until the end of the 19th century there were frequent devastating floods.  In addition, tanneries, dyeing works and the Hütteldorf brewery used to depose of their waste into the river – you can imagine what it must have looked and smelled like in the 1800s.

To regulate the river, the Vienna City Planning Office commissioned the building of a reservoir in the Vienna Woods, the Wienerwaldsee near Pressbaum, to control flooding.  This lake is also now a beautiful recreation area, where joggers, skaters and bikers like to exercise.

Red, blue and green – joggers frequent the walkway around the Wienerwaldsee.

The path is also popular with skaters.

Peaceful it is not, however, as it is surrounded by roads and the noise of traffic can be heard all around.  The wildlife does not seem to mind it though, I saw herons and other waterbirds.  You can see some of its beauty in the slideshow here.

Sunset at the lake turns the water pink.

Just a sliver of moon above the lake

Blue hour at the lake is spectacular with the reflections of street lights in the water.

In the west of Vienna near Auhof an attempt was made to regulate the outflow of the Wien through retention basins.  The renaturation of the Wien has led to some of the reservoirs forming a large wetland habitat today.

Incidentally, Otto Wagner, the architectural designer of the Stadtbahn, wanted to cover the river in the course of light rail construction from Schönbrunn (13th district) to Karlsplatz (1st / 4th district) to build an elegant boulevard on top (Wienzeile) between the imperial palace and the city center.  Fortunately – or else we would not have river walks in Vienna today – he did not entirely succeed with that plan, and the vaulting was only accomplished on a smaller stretch of 2.8 km, starting downstream from the Pilgram bridge. Did you know that the Wien runs under today´s Karlsplatz?  In the 1960s, there were discussions about turning the riverbed into a city highway – hard to imagine today!

View from the pedestrian bridge at Wolf in der Au

In the background behind the reeds you can see the church of Mariabrunn in Penzing.

Ecological restoration in the West

As early as the 1990s, the City remodeled the Wienfluss at the Auhof retention basin to a “close to nature” condition on a total length of around 1.5 kilometers.   In March 2014, they restored a further 300 meters between Nikolaisteg and the Halterbach estuary, to safeguard and restore the ecological functionality of the water body and contribute to improved flood protection.

Long-term exposure at the Wienfluss 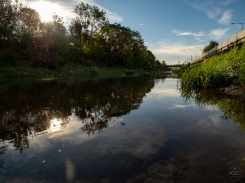 One might think one is in the countryside – except for the traffic noise.

The restoration works employed so-called engineering-biological construction methods. For example, the shores were stabilized with wood, live shrubs and other plants.  The pavement along the shoreline was demolished in this area. Gravel and stones now provide a structurally rich, natural surface. Deeper areas in the water create habitat for crayfish, fish and microorganisms. They redesigned the estuary of the Halterbach, which flows into the Wienfluss, to improve the water structure and create fish passage ways.

There is a beautiful bike path you can ride all the way to Purkersdorf. 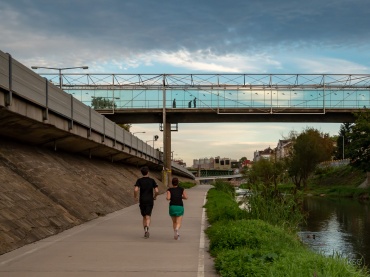 The path is there for walkers and joggers too.

The addition of the walking- and biking path in 2010 has created a wonderful additional recreation area.  The “Wienfluss-Weg”, opened in 2010, leads along the Wien from Auhof to the Kennedy bridge in Hietzing (U4 stop).   Cycling, walking and relaxation in the riverbed promise a quick fix from urban stress only a few meters away from public transport.

You can take the bicycle all the way from Kennedybridge to Purkersdorf.  The bike path does not always run along the Wienfluss, but in large parts it does, and at any rate the entire stretch is really lovely.  It is well worth exploring this riverine landscape. I love it – and so does Alfonso (he went swimming!) 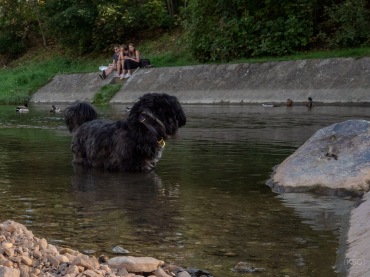 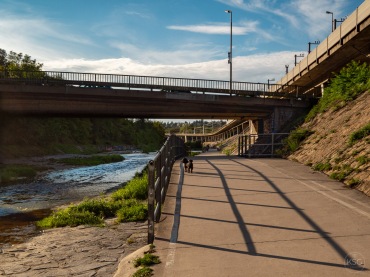 Shadows on the bike path

And if you´re there at nightfall, you can get lovely blue hour photos!

Sources: Wikipedia, Website of the City of Vienna, Wienerwald Tourismus

One thought on “A river runs through Vienna”