OK, I admit it: I´m a dog person.  I love them.  I have a “dog radar” – if a dog passes by in the street, chances are my heart will beat a little more joyfully.  I follow several dog feeds on Instagram, and my heart bleeds for every adoptable candidate from a shelter, even though I already have my adorable Alfonso (our second shelter dog, who joined the family as a one-year old in 2016 via Animal Care International, after spending some time on Bosnian streets).  Well, I´m not the only dog lover in Vienna:  According to official statistics, there are some 55.705 registered dogs in our city!

So it´s about time I focus my blog on a doggy theme, i.e. where to spend some refreshing moments with your four-legged friends when the heat is on.  Now and then I read on dog forums that people feel sorry for city dogs, because poor creatures, no space to run about, only hot city pavements and yaddayadda.  Well, I say, at least where Vienna is concerned, that is not at all true.  The city currently offers 176 marked, often – but not always – fenced dog runs (Hundezonen), ranging in size from very large to very small.

Overall there are 1,147,209 m2 of marked green areas for dogs – and that is not counting all the “unofficial” dog zones where people walk their canine friends (such as the Vienna woods, parks, etc.).  Incidentally, there are also 3536 doggy doo bag dispensers spread all over town.

This week I went to check out some of the official dog bathing spots in Vienna.  Our first stop was Seestadt, conveniently reachable by the U2 line. 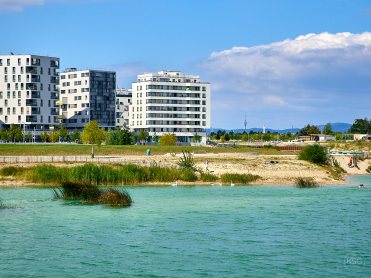 Green water, modern highrise apartment blocks, and a view of the Donauturm at Seestadt Aspern 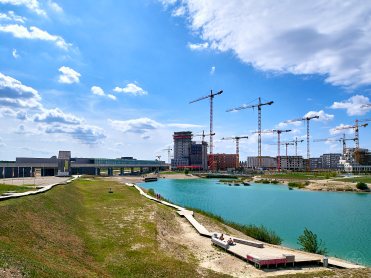 The Seestadt Aspern is a rather new development, still under construction as evidenced by a large number of cranes, and has a somewhat artificial “new” feel to it.  It is almost “in the middle of nowhere”, but quickly reached nevertheless.

There is a large fenced-in dog playground with water access right next to the U2 stop.  Alfonso and other dogs there liked it, but there is as yet no shade, no old trees to sit under, and so you might want to bring your own shade if you decide to check it out.

The area is, at any rate, an interesting new space to explore.  There are long wooden boardwalks along the artificial lake and across grassy hills (currently brown and dry), views of nearby fields and of industrial warehouses.  I observed people picnicking, riding bikes, jogging and, of course, swimming.

My second stop was one of the dog “beaches” on the Donauinsel, as it was along the same underground line.  On the way you pass Donaustadtbrücke – an interesting bridge featuring loads of street art and a separate bike/roller skate tunnel – you can walk to one of two dog bathing areas.

We visited the Hundestrand Süd.  People were fishing, dog-people were lounging on picnick blankets and even in a sun tent when we visited.  If your dog likes swimming, this is for him/her, but if, like Alfonso, he prefers to just wade along in the shallow bits of the water, it is less attractive, because there is a big rock border that first has to be traversed, and it may not seem “safe” to the dog.  Note that this area is not fenced, so if you have a dog who likes to run away, it´s probably not the best place to let her off.

The beginning of the dog run 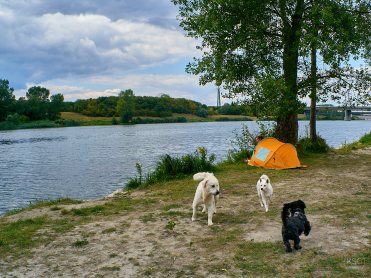 Dogs at play at the Donauinsel dog bathing area

A second option on the Donauinsel is the Hundestrand Nord (which I did not check out, and which may be the nicer one – I hope to get a chance this coming weekend).  By the way, on the entire Danube Island, with the exception of the marked dog bathing zones, you have to keep dogs on a leash or muzzled.  (While Vienna is generally very dog-friendly, some rules do have to be observed.  In public places, dogs should generally be kept on a leash or muzzled – but in dog zones they can run free.)  Interestingly, there is free WIFI at the Donauinsel, and it has a special “dog button”!  The “dog button” on the page of wien.at Public WLAN on the Donauinsel informs dog owners about dog runs, prohibition zones, behavioral rules as well as topics relevant to animal welfare.

A really nice and large dog playground with water access is at the Alte Donau (Old Danube), on Ferdinand-Kaufmann-Platz,right next to the Angelibad, a public open air bathing area originally built in 1920.

This dog bathing area features a wide beach, some agility equipment for dogs, and a place where you can get drinks and snacks, plus plenty of shade trees.   Approximately 14,000 square meters, it offers plenty of space for dogs to play, exercise and for you to swim with the dog or just relax.  Great place, that one.

I have yet to explore the other official dog bathing areas in Vienna.  There is Teich (Pond) Hirschstetten in Donaustadt.  In the dog run area on the southwest bank of the Hirschstetten pond dogs can romp in the water in a 27,000 square meter are, one of the largest dog zones in Vienna.

In Liesing (23rd district), there is the Draschepark (not to be confused with Alois-Drasche-Park in the 4th district).  The Liesingbach, a small brook that dogs can bathe in, divides the 50,000 square meter dog run from the rest of the Draschepark.  Draschepark used to be a 17th century castle park, but hardly a trace of this remains today.    The differentiated layout of the large estate is all but gone, only the chestnut trees and field hedgerows remain. Parts of the Draschepark have become forested by natural succession. The brooks Mühlbach and Liesing have been regulated. Playgrounds and a large barbecue area now invite families to spend time.   There used to be some sculptures by famous baroque sculptor Georg Raphael Donner in the park, representing river gods, and these can now be found in the castle park of Ebreichsdorf.

Of course I have seen dogs romp in fountains, the Wienfluss, and other places not sanctioned by the City, but that´s another story…

Information sources: Website of the City of Vienna, Wikipedia

Don´t forget to bring a muzzle for the dog for public transport!  My daughter tells me that if you are caught with a dog without a muzzle, you are liable to pay a hefty fine.