At least once a year I visit the summer music festival in Grafenegg, Weinviertel, just an hour from Vienna.  This year I am visiting twice, because on Saturday I had the opportunity to participate in an instawalk to this great location.  Together with our Instagramers Austria host Oliver Oth an a group of fellow instagramers, we toured the castle and grounds, were treated for dinner at the “barn”, and listened to a beautiful concert with the BBC concert orchestra with @igersaustria.at.

The castle of Grafenegg is great for an excursion out of the city, with its highly romantic historicism style, the extensive castle grounds, the fantastic concert venue Wolkenturm (“cloud tower”), a wine bar, and a restaurant/cafe.  I´m going back there in August for a concert with the excellent Tonkünstler-Orchester Niederösterreich. 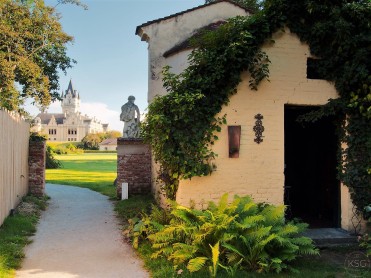 You can find many nooks and crannies in the park. 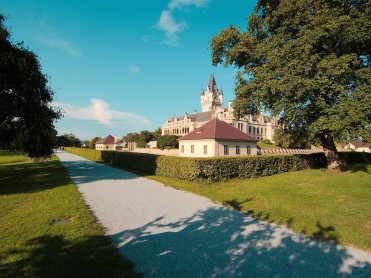 The wall houses still date back to the 17th century.

Grafenegg is the most important castle complex of Romantic historicism in Austria.  The castle chapel, the castle courtyard and the sumptuously appointed state rooms show the diversity and the artisan excellence of historicism.

Historicism at a historic location

Although what you see today is a relatively new version of the castle, this location already had a castle in earlier times.  In 1294 a small settlement called Espersdorf was first mentioned on the site of what is today Grafenegg, consisting of only a mill and a farm. After 1435, the farm was surrounded by a ring wall and moat. At that time already a princely fiefdom, in the second half of the 15th century it passed into the ownership of Ulrich von Grafeneck, after whom it is still named.  Thereafter the castle changed ownership repeatedly over centuries.  Between 1622 and 1633 it was turned into a fortified castle. At the four corners of the complex, surrounded by walls and a moat, so-called wall houses were built, which still exist today.

By succession, it eventually came into the possession of Count August Ferdinand Breuner-Enckevoirt in 1813.  It was he and his son, who finally reshaped the castle between 1840 and 1888 in the spirit of romantic historicism.  This is the version you can see today.  Between 1945 and 1955, the building was damaged by the Russian occupying forces and the furniture and parts of the book inventory stolen or burned (!). From 1967, the castle was restored with the support of the province and the federal government and made accessible to the public.

The interior is well worth a visit.  You can see some of the stunning carved ceilings and the beautifully appointed vast rooms in the slideshow below (open the page on a computer, on a mobile device the slideshow probably does not come out).

Beyod the castle itself, the castle grounds offer opportunities for a pleasant stroll through the park.  Once upon a time, in the 17th century, there was a geometric and baroque star garden to the west of the palace.  During the remodeling in the mid 19th century, the park was turned into an English landscape park, with a more nature look.   The park is one of the most important protected garden architecture monuments in Austria.   A great place for a relaxed walk with the family – dogs are welcome on a leash! 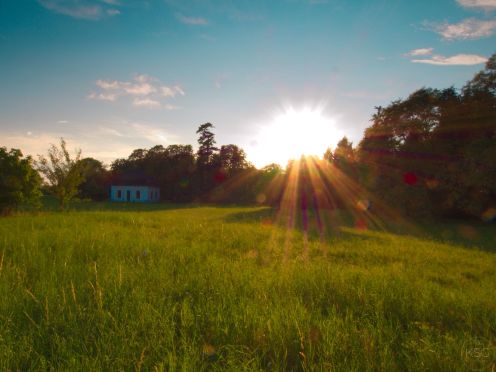 A “little house on the prairie” 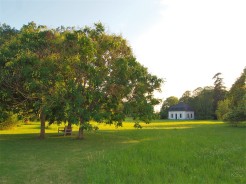 The same cottage in different lighting 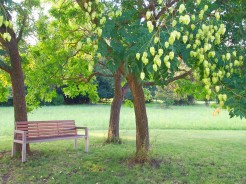 For art lovers, there are some interesting sculptures scattered throughout the park.  Eight outdoor sculptures were erected in cooperation with Kunst im öffentlichen Raum Niederösterreich and the Grafenegg Kulturbetriebsges.m.b.H.

And if you get hungry, there are a number of culinary offerings on location.

Reaching to the clouds

Though not quite a sky scraper (in German, literally, “cloud scraper”), the Wolkenturm really does seem to reach up to the clouds.  It is an impressive modern antidote to the principal historicism dominated structures of the Grafenegg Complex. In 2007, this open-air stage with 1700 seats and up to 300 spots for picnicers, was built in the park east of the castle. The sculptural building picks up on the element of the amphitheater as a garden element often found in baroque gardens.

Since the summer of 2007, the Grafenegg Festival takes place here annually with renowned orchestras, singers and conductors.  There is also the Concert Hall Auditorium inside the Grafenegg estate building, which serves as an alternative venue, should bad weather prevent an open air performance. As I said, I come every year, and I can highly recommend it, as it is really a magnificent setting for a stellar concert experience. 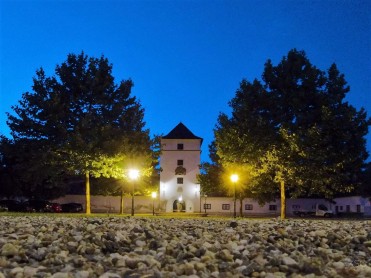 Blue hour at the castle 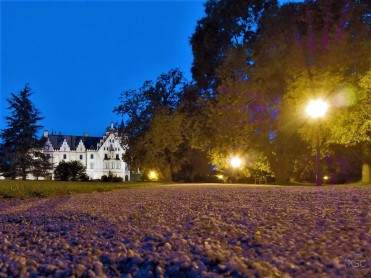 The paths and castle are brightly lit at night.

To top it all off, last Saturday night, we were blessed with a stunning moonrise.  I feel so lucky!  Thank you Instagramers Austria and Grafenegg for this wonderful afternoon and evening.

Schloss Grafenegg
Instagram: @grafeneggcom
The castle park is open year round and freely accessible.  The castle with its state rooms, chapel and courtyard is open from 14 April to 28 October 2018 every Wednesday to Sunday, 11am – 5pm.

If you have a Niederösterreich Card, you can visit the castle for free.

There is a shuttle bus you can book for concerts that transports you there and back from Vienna – a good option to avoid a tired drive back after the concert.

One thought on “A musical romance somewhere over the rainbow”