Anton Hartinger was a Viennese flower painter of the 19th century.  Until 26 August 2018 you can see a (small) selection of his many flower and plant illustrations at the Gallery of the Academy of Fine Arts.  Hartinger was a prolific painter, he produced almost 900 botanical illustrations.  On view here are some watercolor paintings he made in preparation for the splendid botanical publication Endlicher´s Paradisus Vindobonensis, Abbildungen seltener und schönblühender Pflanzen der Wiener und anderer Gärten und Museen (illustrations of rare and ornamental plants).

Paradisus Vindobonensis was first published in 1844 in a large folio format with lithographs of the paintings.  Hartinger sold the original paintings to the Academy, to be used for education purposes.  He created life-size illustrations of exotic flowers from Asia, Africa and South America that were being cultivated in Vienna gardens and greenhouses in his day.  The quality of his works is outstanding, with a rare level of detail and brilliance of colour. 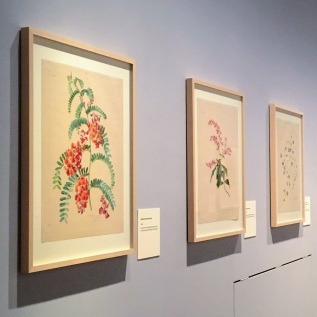 The level of detail in Hartinger´s paintings is amazing 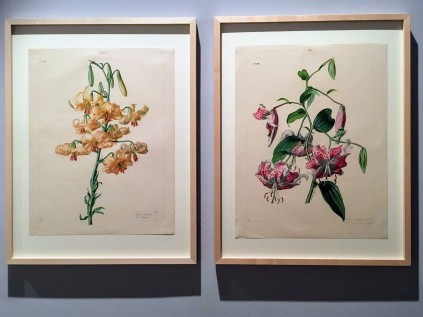 Vienna had a long tradition of flower painting, which began in the late 18th century and had its hey day around 1900. The earliest botanical illustrations are found in medieval herb books, which collected medical knowledge about plants.  The first known such botanical book is the medieval Codex vindobonensis, a.k.a Vienna Dioscurides  from the year 512.  At the end of the 18th century, “flower emperor” Franz I. (I guess he loved flowers) employed a permanent court painter.  Matthias Schmutzer was tasked with  documenting the exotic plants of the royal gardens.  The resulting work was the Florilegium , a compendium of large watercolor paintings that Schmutzer produced from 1794 to 1824.

Another Austrian flower painter was Franz Bauer, who occupied the position of royal plant painter at the famous Royal Botanical Gardens in Kew (London) for 50 years.  Several of his flower water colors are kept at the library of the London Natural History Museum.

Anton Hartinger was born in Vienna in 1806, the son of a craftsman and learned flower drawing from several well established Viennese flower painters, including at the Academy.  He eventually became a contract painter for archduke Charles, who asked him to paint the roses at the Weilburg castle in Baden (see my rosegarden post).  In 1845 Hartinger was awarded the great golden medal for art and science, followed by several other awards later.

The exhibition at the Academy Gallery offers an excursion into the glittering Viennese glasshouses of the last century and provides an insight into the extensive collection of floral watercolors in the Kupferstichkabinett (copper plate cabinet).  In the little photo gallery below I´ve tried to pair photos of Hartinger´s paintings with some flower photos I took.  Unfortunately I cannot match species for species, but I´ve done my best to at least match genus or color scheme.

Hartinger´s water colours are characterised by perfect craftsmanship and scientific accuracy.  He possessed the skills of precision and a sense of aesthetics.  He also contributed to the further development of colour lithography.  During the first print rounds of the books he still had to hand-color the monochrome prints, which was obviously a chore.  Later he had succeeded in developing the technology to a point where he could directly print the colours.  In 1851 he was given an award for colour lithography and in that year founded an “artistic-lithography institution”.

Today there are hardly any botanical illustrators in the German-speaking world, unlike in anglophone countries, where flower painting is experiencing a kind of renaissance.  The American Society of Botanical Art and the Royal Botanic Gardens at Kew house large collections of flower art. I actually got to see some of it when visiting the Shirley Sherwood Gallery at Kew Gardens in May – fabulous!

Even so, the University of Vienna offers courses on botanical illustration — if only I had some drawing talent!

If you want more, the Austrian National Library published the book A Garden Eden. Masterpieces of Botanical Illustration in 2016 (new edition in 2018), offering an overview of botanical illustrations from the 6th to the 19th century.  I want it!

The Unequal Couple by Lucas Cranach the Elder (15319

Because the main building of the Academy of Fine Arts is being renovated,  the Academy Gallery is temporarily housed at the Theatre Museum, close to the Albertina, so you get the bonus of visiting two museums in one go.

By the way, there is currently (until 30 September) another flower painting exhibition on in Vienna, at the Belvedere.  Sag’s durch die Blume! chronicles Viennese flower painting “from Waldmüller to Klimt”.  I have not seen that one yet, but plan to go soon – perhaps when the weather is not good enough to see real flowers in Vienna´s abundant gardens.

opening hours every day except Tuesday 10am to 6pm