One of several cultural activities I meant to write about while the exhibition is still open was a visit to the OstLicht Gallery with Instagramers Vienna, an invitation by Female Photographers Vienna.

This was supposed to be on until 28 March, but of course COVID-19 also closed down this space, although from the website I gather that it can be visited by appointment. Well, luckily we still managed to see PING PONG #3,  the photographic exchange of Anna Breit & Luisa Hübner. This is already the third exhibition in a creative series launched by Female Photographers Vienna .  It is a visual dialogue on the subject of the body. The rules of the ping pong game are simple: for a period of 10 weeks, each of the two photographers responded to a picture of the other with a picture of her own (in this case form the archives).  The result is a series of 52 pictures, a numbered series of correspondences.

During the instawalk Instagramers Vienna got to play the game with these pictures, and while some choices were the same, the sequence was in the end new and unique.  The possibilities for play are almost endless.  This is actually a game I would like to try out with a friend.  Sounds like fun, doesn´t it?

Instagramers Vienna playing their own version of photo ping pong

Enjoying a drink at OstLicht

There are lots of us, some well known, some not so much.  Female Photographers Vienna aims to make our work more visible, and to support networking among female photographers.  The association was initiated by Eva Mühlbacher in October 2017 and consists of a team of six curators and art educators.   They show the work of female photographers from Vienna mainly on their Instagram platform, but have occasional exhibitions in different venues around town.

This third Ping Pong exhibition is at the OstLicht Gallery, a very large space for photo exhibitions on the terrain of the Anker Brotfabrik — a former bread factory where some buildings were preserved from demolition by making them available as a space for arts and culture, among other uses).  The OstLicht Collection holds over 120.000 prints from 19th century, modern and contemporary photographic masterpieces. 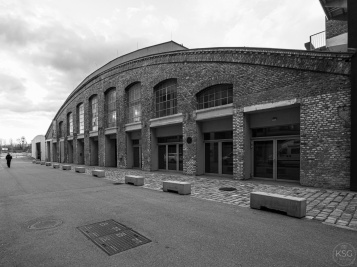 The terrain of the Anker Brotfrabrik

The terrain itself is also worth a visit – some architectural gems for lovers of old industrial.  So, Vienna architecture photographers, have a look, and while you´re at it, check out some of the creative spaces there.

2 thoughts on “Ping Pong for photographers”